Unione Sportiva Follonica Gavorrano is an Italian association football club that represents the municipalities of Follonica and Gavorrano in Tuscany, the latter is also the company headquarters.

The club currently play in Serie D, the fourth tier of Italian football.

In the season 2009–10 it was promoted from Serie D to Lega Pro Seconda Divisione. The club was relegated back to Serie D after the 2013-14 season after only avoiding a relegation in the previous campaign in order to fill vacancies in the division. The club subsequently earned promotion to Serie C as Group E champions of the 2016–17 Serie D season. In June 2019 the merger between the company of Follonica and that of Gavorrano was made official: the new team, heir of the Gavorrano sporting tradition takes the name of Follonica Gavorrano and is admitted in Serie D. 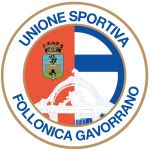