Exeter City Football Club is a professional association football club based in Exeter, Devon, England. The team play in EFL League Two, the fourth tier of the English football league system. Known as the "Grecians", the origin of their nickname is subject to speculation and debate. The club is owned by the club's supporters through the Exeter City Supporters' Trust. The club contests West Country derby matches with a number of sides, with Plymouth Argyle being their fiercest rivals.

Exeter City was founded in 1901 and began playing their games at St James Park, where they remain to this day. They joined Division One of the Southern League in 1904. After a tour of South America in 1914 to generate awareness of football in the continent, the club became the first side to play a national team from Brazil. As a result, City and Brazilian side Fluminense are now also partner clubs. Exeter were invited to help create the Football League Third Division in 1920. They were assigned to the Third Division South the next year and won the Third Division South Cup in 1934. They remained in the division until becoming founder members of the Fourth Division in 1958. They were promoted in 1963–64, only to be relegated after two seasons. They were promoted out of the Fourth Division again at the end of the 1976–77 season and managed to stay in the Third Division for seven seasons before being relegated in 1984.

Exeter won their first league title in the 1989–90 season, gaining promotion as Fourth Division champions under the stewardship of Terry Cooper. Relegated in 1994, they lost their Football League status at the end of the 2002–03 season. They spent five seasons in the Conference, and recovered from defeat in the 2007 play-off final to win promotion out of the play-offs the next year. Manager Paul Tisdale built on this success by winning promotion out of League Two in 2008–09 and Exeter survived for three seasons in League One. Returning to League Two in 2012, they have lost in the play-off finals in 2017, 20

This page also has a version in other languages :  Эксетер Сити (russian) 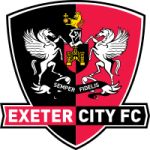 Swansea City continue their preparations for the 2022-23 campaign as they go head to head with Plymouth Argyle at the Home Park on Tuesday.
7 May 2022
talksport.com

There was trouble at St James Park after Exeter lost 1-0 to Port Vale and missed the chance to win the League Two title.
7 May 2022
mirror.co.uk

The second tier's automatic promotion and relegation spots have already been confirmed but the final day of the regular season will rubber-stamp which sides are heading into the play-offs
9 March 2022
mirror.co.uk

The 22-year-old stopper has been in superb form for League Two side Mansfield Town since joining on loan, and has been showered with praise by one of his teammates for his approach
17 February 2022
mirror.co.uk

The FA have handed Mark Cooper a hefty touchline ban after the Barrow manager was deemed to have referenced a female assistant referee's gender in an exchange during a League Two fixture
15 February 2022
mirror.co.uk

The Scot led both Plymouth Argyle and Morecambe to promotions out of League Two but has been unable to turn the tide at former Premier League side Bradford and has been relieved of his duties Derek Adams has been dismissed as manager of Bradford City, just eight months into the role
9 January 2022
mirror.co.uk

Kaide Gordon scored an important equaliser for Liverpool shortly after they fell behind at home to League One side Shrewsbury Town in the third round of the FA Cup
9 January 2022
mirror.co.uk

Jurgen Klopp's FA Cup debut, pitch admission and "you want it like this" claim

Jurgen Klopp has endured little success in the FA Cup thus far and faced a baptism of fire six years ago when he took Liverpool to League Two Exeter, who battled to a draw
4 December 2021
mirror.co.uk

The EFL Trophy is down to the third round as teams from League One, League Two and the Premier League academy sides compete to reach the Wembley showpiece
3 October 2021
mirror.co.uk

It was arguably one of the most random visits involving an English football club. Back on June 14, 2002, 'King of Pop' Michael Jackson paid a visit to the home of Exeter City. His appearance was a favour to his friend Uri Geller, the TV magician who was co-chairman of the club at the time. The appearance was designed to bring in much-needed funds for the struggling club and Jackson agreed, as long as some "sick kids from hospitals" could come along with him.