Nazilli Belediyespor is the local football team for city of Nazilli in Turkey. They are currently playing in the TFF Second League.

Nazilli Belediyespor founded in 1984. At the beginning, the club's kit colours were yellow and navy blue, but due to request of supporters in the city, colours changed as white and black. The team strolled between TFF Second and Third Leagues for years. 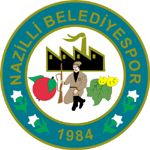